by dustin
I want to include some kind of "Trophy Case" inside Castle Vox. This would track which maps have been beaten, using which scenario players. maybe per difficulty. Images This is based off what we did with Ancient Empires Lux.

Also, it would be a place to record 'Games Started', 'Games Won', and any other basic stats.

I'm just starting to think about how this should look, so ideas are welcome.

It could be a new window of its own, or there's a possibility of making it part of the main window or plugin manager. The map beaten and scenario player beaten symbols should probably be worked into their respective popup-boxes on the main window, to easily see and play factions that still need to be beaten.

This is an incentive to get people to try and win using each scenario spot.
by mbauer
I think it's a great idea! Players love those shiny .jpgs!

I think a new window would be best because as players accumulate more and more awards it would start to clutter the main window and/or plugin manager and I think those should stay as clean as possible.

MB
by dustin
Here's a mock-up of including achievement stars in the main window. 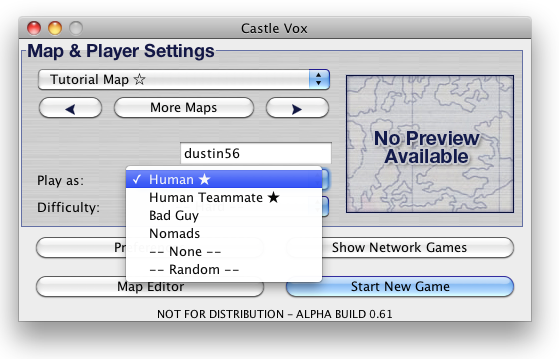 The map list could have stars beside the maps that have been beaten (hollow star for some players beat, solid star for all players beat, or maybe multiple stars for difficulty).

The player list also has stars beside the players that have been beaten.

This would make it easy to see which maps/factions need to be beaten right from the main window.

There could also be another window that shows more with shiny gifs. Or a rank and shiny gif could be added to the main window (there's lots of room for expansion on it right now).

Thoughts?
by mbauer
Yeah that would work.

The shiny .gif window/room could be more like a rankings/Hall of Fame screen. With trophies for things like quickest win, longest game, largest army, most castles on map, winning with only soldiers, etc. etc. Maybe the player could have choice to either keep those private or see how they stack up against other players.

I'm having a hard time envisioning what the shiny gif awards would be. Maybe they get an award graphic when they beat the map with all the different players. Then another one when they beat it on the hardest level.
by dustin
oh man, I don't relish capturing all those stats. But you're right it would be cool...
by el toro
very cool.
by Enzo1997
Maybe we could include it in luxtoberfest. That is if Dustin can launch it in time... [/i]
by dustin

mbauer wrote:My suggestions for other stats:

Now all of those are stats, but the button is called "Achievements." Is there a plan to include more achievements such as "Winning with only soldiers" or ?

The star thing is confusing me a little. 1 does 1 dark star and 2 empty stars mean?

How about instead of stars, do something similar to AEL where a castle is slowly being built as the player beats all the possible combinations on the map? That might be too hard to show though.

by Behemoth
Be happy to help contributing trophy designs if needed...

I did notice in this area I'm listed at having played 87 times with 0 wins. Not that I care too much at this stage but I have won many times against bots. Is this a bug?
by Behemoth
One thing missing from Lux that could be great here is animated .gif awards. Images that loop with 5-10 frames - file sizes no greater than 12kb.
by mbauer
How about a win percentage? Games won divided by games started.

Is it redundant to have "You have won on x maps" and that same thing for each difficulty?

I'm confused as to why there is only 1 of each star/castle icon in the description at the bottom of the achievement screen, but on the main interface there are 3 next to the maps and starting positions?

What causes one to move up in rank? And can one be demoted? If not, I think they should.

MB
by dustin
the Hard difficulty stats are the ones that really matter. I considered leaving out Medium, and just giving overall and Hard stats. But including medium doesn't cost much.

The number of Stars is the difficulty level. Win a map on easy and 1 star will show. Win it on hard and 3 stars will show. What's a better way to make this clear?

Winning more maps is the main thing rank is based on. There's no demotions.

The next beta (later today) will have a nicer Achievements screen in it...
by RandomGuy
I show the same numbers for easy/med/hard - even though I only play on hard? do the hard count as beating it on lower levels as well? or is it just not tracking accurately?
by dustin
Beating a map on hard also counts as beating it on lower levels.
by mbauer
I think having Hard also count for the lower levels is a bit confusing. Each level should only count for that level.

For the total section I think you could re-word it so it's a little clearer that it's a total. For example:

For the icons I think you need to describe what 3 icons means as opposed to 2 or 1. That might start getting wordy though.

So my idea (I don't know if it's possible) would be to have the icons only show up in the main window for the difficulty they have selected. So if I beat a map on Hard, 1 star would show up next to the map when I have a "Hard" bot selected in my difficulty drop down. If I change my bot selection to a medium or easy bot, then that star would no longer show next to that map.

I think a "close" button is needed on the achievements screen and maybe a "reset" also.

I would suggest that if a player is only playing on Medium, they will move up in rank much slower than a player playing on Hard. (that might already be the case, I dunno).

This might not be an option for Tuesday's release, but I'd also suggest a point counter and a "points until next rank." Each map and each player is assigned a point value for each difficulty level. That way there's a tangible, visual representation of how one moves up in rank.