Alright then, we are ready to go.

Please PM me with your 3 moves. Also, please let me know if the Techno Viking will throw a move for you (specify Techno Viking throws the first, second, or third sign for you - if you choose to have Techno Viking throw for you, there is no need to specify the specific move, just that Techno Viking is throwing it). Also, specify if you are using Chuck Norris to Defend.

One time only, you may elect to summon the Techno Viking to throw one of your signs for you. Again, this is only one time the entire tournament. I can assure you, Techno Viking knows which sign to throw.

Chuck Norris will be providing defensive training. Chuck Norris can win any battle, but he will not attack unprovoked. Once per tournament, you can summon Chuck Norris to defend against a Techno Viking attack. If your opponent has chosen to summon Techno Viking for any of the 3 thrown signs in a round, and if you have summoned Chuck Norris to help you defend, Chuck wins the contested throw.

In summary, Techno Viking can win any 1 throw for you, but Chuck Norris lies in the weeds to defend you against Techno Viking for all 3 throws any time he is summoned. If you have elected to use Techno Viking, and Chuck Norris is defending, then Chuck Norris wins the contested throw. Both special moves can only be used one time per tournament. ∞ TSK grabs a seat next to SunTzu and passes the popcorn... ∞

Sorry in advance but him not gonna be able to make it in this tournment....Were moving in our new house faster then what it was suppose to be,to day or tomorrow and were not gonna have the internet for a couple of days...

Sorry again and good luck to all.
Top

Nimrod7 is going to be taking Samuel99's place in the tourney.

I will update the tournament bracket this evening.
Top

For the second throw, Llux Llama Summons the TECHNO VIKING:

Much to the Llamas dismay, Shockandawe rises up in defense after extensive training and the aide of CHUCK NORRIS: 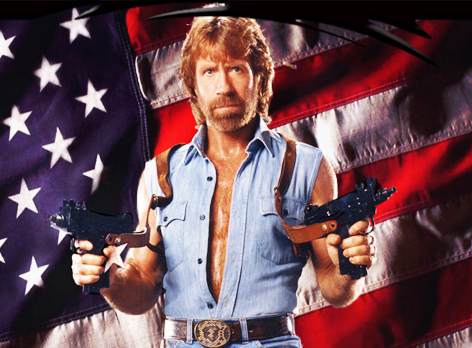 Results of This Match:

after 4 games of Rupunzle. Finally.

Good match, Shockandawe. But not even the mighty Chuck Norris could withstand Furtive Furry Might of LLAMA!
Top

You aren't the only one who is confused....

Rhye wonders to himself, "Where is Chuck Norris when you need him?"

The tournament rules apply in the sudden death matches. Special moves are allowed if you have not already used them.
Last edited by jesterme on Tue Mar 22, 2011 2:19 am, edited 7 times in total.
Top

Results of this Match:

OH what a match! The finesse of fine digitry! Good match.


The Clowns Shall Not Be Provoked.

Now, on with the tournament.
Top

CHUCK rocked in Planet of the Apes.

Results of this Match:

Well at least it was a full kill instead of the half kills that I'm used to.

Results of the Sudden Death Match:

RandomGuy declined the Karate Class Chuck Norris was hosting. Too bad, because for her second move, Schroberts has summoned the Techno Viking!

Bring it on, Engie

You can run Enzo, but you cannot hide.

It has been brought.

kude has summoned Chuck Norris to make sure the fight is fair...

The Clowns Shall Not Be Provoked.

BTW Llama, what I do with my wife behind closed doors is none of your business....well unless you want to MAKE it your business

Noodles. Dirty mind. As always. Nice to have you around. And yes. I will go down on your wife. Wait! You are DEFINITELY NOT married to my sister right? I still get confused about that sometimes.....
Top

Best thing about this game, is i have NO friggin idea what im doing......
Top

n00less clown-be had the idea, so what did you expect?

mazza wrote:Best thing about this game, is i have NO friggin idea what im doing......

Here's a <a href="http://sillysoft.net/forums/viewtopic.p ... parison</a> of all moves thrown prior to Part Quatre.

Individual players results from previous tournaments have not been tallied, you'd have to sniff that info out the hard way.
Top
Post Reply
94 posts